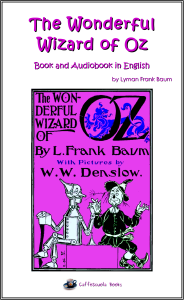 “Chapter I. The Cyclone

Dorothy lived in the midst of the great Kansas prairies, with Uncle Henry, who was a farmer, and Aunt Em, who was the farmer’s wife. Their house was small, for the lumber to build it had to be carried by wagon many miles. There were four walls, a floor and a roof, which made one room; and this room contained a rusty looking cookstove, a cupboard for the dishes, a table, three or four chairs, and the beds. Uncle Henry and Aunt Em had a big bed in one corner, and Dorothy a little bed in another corner. There was no garret at all, and no cellar–except a small hole dug in the ground, called a cyclone cellar, where the family could go in case one of those great whirlwinds arose, mighty enough to crush any building in its path. It was reached by a trap door in the middle of the floor, from which a ladder led down into the small, dark hole…”